A dripline signifies the area under the outermost branches of a tree. It’s this interface between worlds where interesting and productive things happen.

With thanks to workshop participants who provided advice and feedback during the writing of this article.

Reflections on MozFest session on social transformation and movement tactics

Mozfest is Mozilla’s annual public festival bringing together artists, technologists, designers and anyone interested in creating a better internet. Hypha member-workers led and participated in two sessions at MozFest 2021 this March. This is what solidarity looks like led by Mai Ishikawa Sutton a Hypha collaborator (video) and Achieving social transformation led by Dawn Walker (not recorded).

Both sessions drew on themes we’ve been exploring in Hypha over the past year: practicing solidarity with projects creating alternatives to digital infrastructure; understanding our role in the decentralized web (Dweb) and co-operative communities; and identifying what tactics allow us to create the futures we want. This post reflects on these themes and is written with feedback from second session participants. In that session, participants were asked to create short speculative stories that drew from existing tactics of social change using a Miro board (a template from before the workshop is available and screenshots are scattered throughout). As people introduced themselves they were asked to share three words to describe the future they want. They then separated into lively breakout to craft stories of their future using movement tactics. We ended the too brief session with a collective discussion of their stories and shared themes.

Decentralized and peer-to-peer alternatives to the internet have the potential to redistribute power. The Dweb ecosystem has many projects and people interested in these potentials who are actively reimagining how networks are built and maintained. The Achieving social transformation workshop created space for participants to imagine decentralized forms of social transformation and reflect on how to get from current dweb practices to these potential futures, rather than accept the emerging decentralized futures on offer.

It can be helpful to approach the topic of social change and transformation pragmatically, from the point of view of someone primed to make sense of the world and act on it. One tool to do so is theory of change, a tool for identifying and modelling outcomes with an emphasis on evaluation that comes from management consulting (a field with specific ways of seeing the world and approaches to problems that are not innocent).

The core concepts and framing to think about changing social relations are:

Even if you have reservations with theory of change (as at least one of us does!) or if your commitments give you other ways of making sense of change—say you are a ride or die Marxist and historical materialism is your jam—the idea that you identify tactics to get you to the vision of the future you want from our present moment is pretty useful. The actual tactics or strategies to use on the other hand, can be more controversial. In the workshop we focused on the tactics different actors tend to adopt in order to map what approaches industry might take up compared to government or third sector. The workshop focused on tactics of individual and collective action, along with social movements, given the nature of the session1. 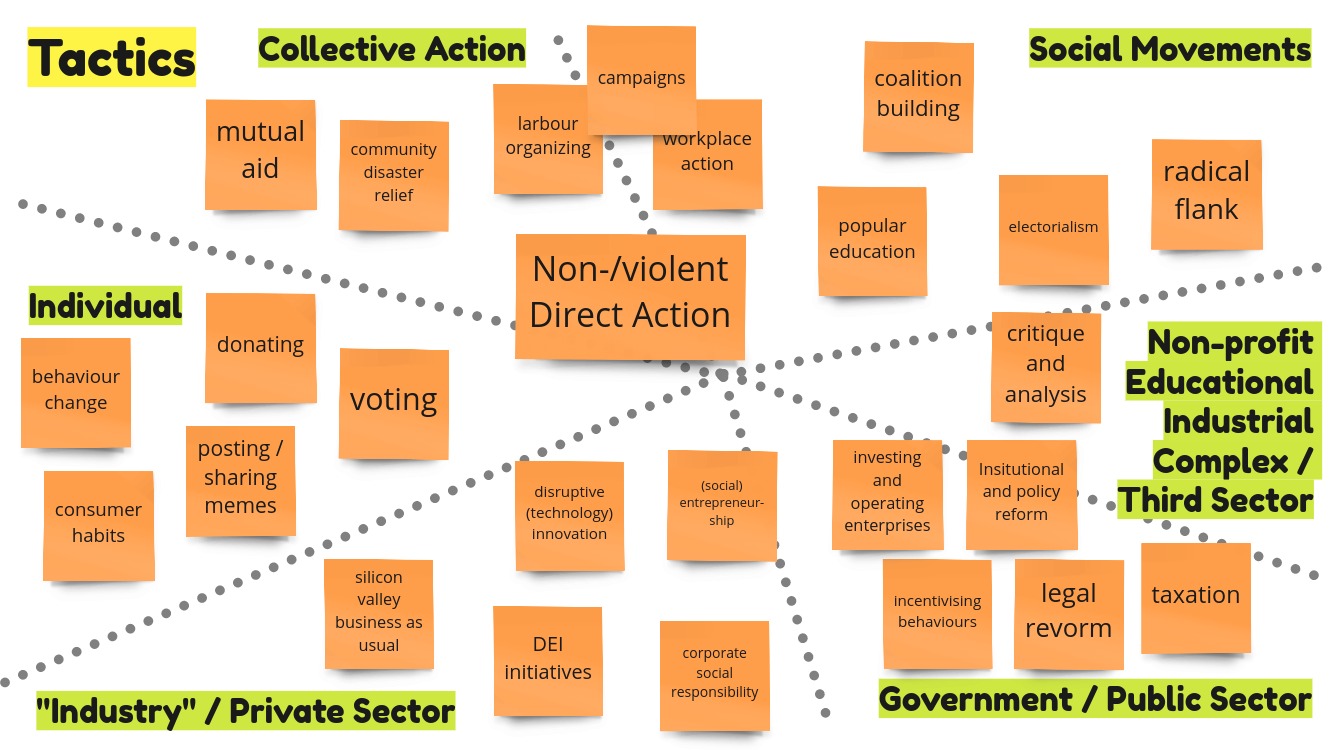 However the people calling for decentralization today aren’t predominantly in the private or public sector. Rather, projects are run by smaller groups, individuals, and supported by larger anchor institutions including Internet Archive and Mozilla Foundation. Currently a wealth of larger organizations and companies are working on decentralizing technologies (watch this space for an opinionated Hypha history of decentralization, forthcoming :D).

In order to try and get at what decentralized futures are being actively imagined and built by decentralizing projects, the workshop introduced existing projects and how they speak about the future.

The Web3 foundation based in Zug (Switzerland’s “Crypto Valley”) sees the future of the web, or Web 3.0, as a “decentralized and fair internet where users control their own data, identity and destiny.” Scuttlebutt Consortium, the loose collective around development of Secure Scuttlebutt, a peer-to-peer communication protocol and self-hosted social media ecosystem, describe the protocol as “transformative for society, decentralizing and enabling local community development free of big corp. It is a fast growing decentralized social network. As an alternative to the large corporate social networks it enables autonomy for the users and a free zone from big data harvesting…” These portrayals of a decentralized future are competing with the emerging one from Silicon Valley’s turn toward decentralization which focuses on narratives of populism versus elites, a preoccupation with being uncancelled, and the disruption of old institutions to talk about diffusing responsibility and gatekeeping the outcomes of this current wave2.

Each view draws from understandings of the future rooted in aesthetics and traditions. Silicon Valley (as always) and even the Web3 foundation rely on notions of meritocracy inflected with libertarian thought. For example, Web3 goals have been presented as “build[ing] a better, fairer system. This is not to be confused with equality of income or outcomes — but, at least, more equal opportunity.” Scholar Finn Brunton reads these decentralizations as rooted in the visions of the future popularized by Bitcoin’s “escape geographies” as termed by Raymond Craib. Those geographies draw from the “canonical novels of American libertarianism…set in the future when systems of governance have become dysfunctional and are beginning to break down. Characters move to or inhabit alternative zones, where they can live outside the emergency, exacerbate the existing crisis, and return to the changed world on the other side of the disaster where their utopia becomes possible.”

In the Scuttlebutt ecosystem many participants speak about the future through a solarpunk aesthetic, which draws from the ecotopian (ecological utopian) tradition, and draws from the *punk naming scheme for future imaginaries. A form of radially optimistic futurism, it draws inspiration from both high and low-tech approaches to post-scarcity sustainable futures in which local communities are powered by solar power and renewable energy. 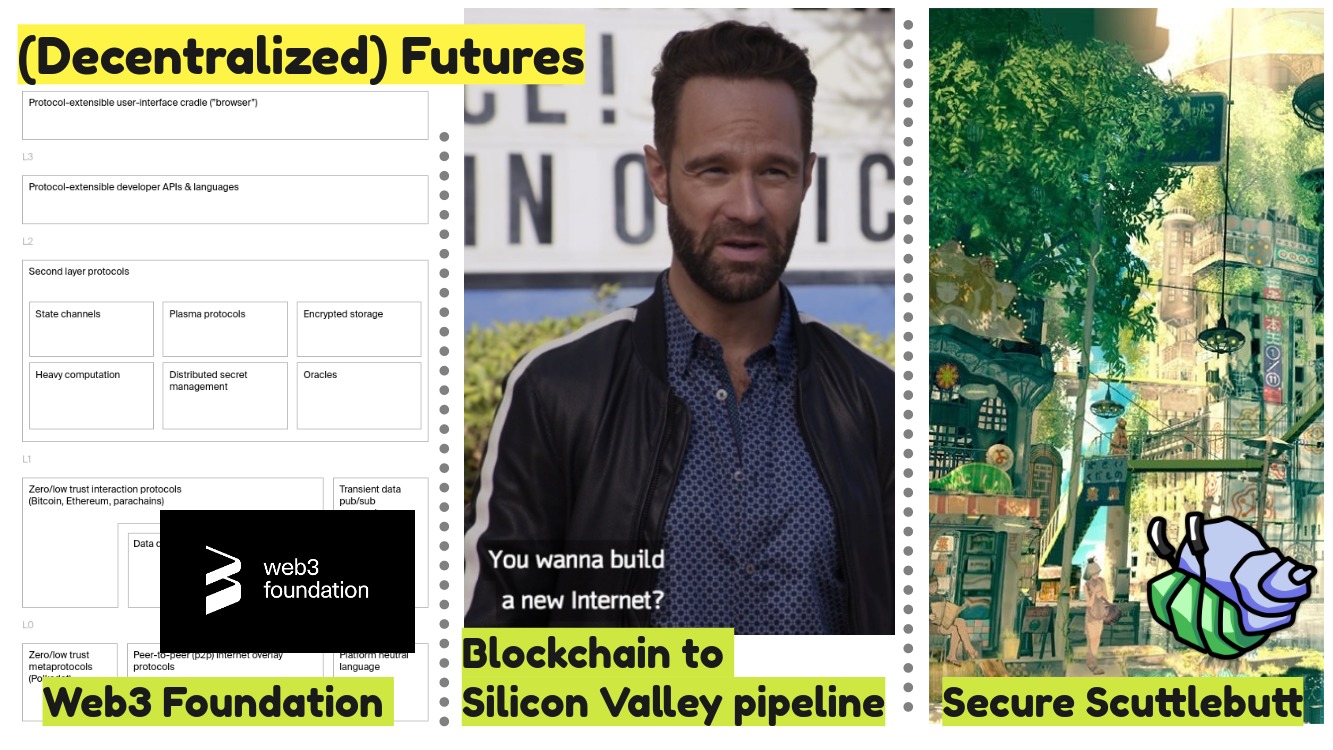 Creating the futures we want

At Hypha we’ve been working on articulating what our own decentralized future looks like through practicing mutual aid and figuring out the specific tactics of tech solidarity work toward the decentralization we want to see. To do so we’ve learned from traditional labour and movement organizing: endorsing campaigns, uplifting (tech) worker organizers and participating in public collective actions and structure tests. We’ve donated to groups supporting those impacted during initial covid-19 lockdowns, we also prepared a COVID-19 resource on transferring to online work and offered to be available in 1:1 calls. We’re still learning what that means in the broader co-operative context and learning what those tactics of reciprocity look like. We’ve also spent time thinking and caring about our territory and relations to place, what it means to be in Tkaronto as treaty people. What are our obligations and responsibilities from where we are rooted in the Great Lakes region and more specifically in territory covered in Treaty 13 and Williams treaties.

We see lots of possibilities to think more about solidarity as a way to inform our tactics: see ourselves in an ecosystem and success in that context. Why don’t you join us to build (eco) (just) (oceanic) decentralized futures together 👐🏼